Christian Hospital Kasganj (CHK) is the largest not for profit organization in the District of Kasganj, in North Indian state of Uttar Pradesh.  Commonly known by the community as ‘Mission hospital’, CHK is working  towards  transforming the lives of our community, especially of the poorest, needy and  ignorant people of district Kasganj and nearby districts through affordable health care, a loving and caring environment and through training programs. Our motto is to follow the teachings of Christ for the betterment of the community and the organization.

HEAL THE SICK IN THE NAME OF LORD JESUS CHRIST!!

Christian Hospital Kasganj is committed to deliver high quality services that are accessible even to the most underprivileged sections of the society thereby relieving their illness and pain. 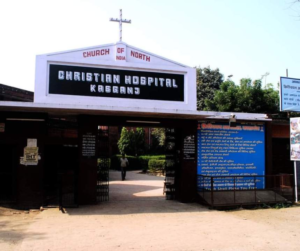 CHK front view prior to its renovation in 2015

Find Us on Google